Two days ago I was deeply contemplating reality and manifesting. More specifically, I was wondering if it was going against other people’s free will to just manifest or create random crazing things. Is it a violation to create things out of thin air, which might cause other people to be uncomfortable or to freak out because it doesn’t fit in to their idea of what reality is? Is it really okay for me to just manifest whatever it is I want to manifest?

One of the things that I was thinking about was manifesting was rainbows. I was thinking about how amazing it would be to just make rainbows appear out of nowhere. I was even getting super creative about it and I was thinking about how awesome it would be to make a rainbow come out of my hand. I would then start to think about how this might freak other people out, and I got a little bit uncomfortable with this idea. It did occur to me at one point that maybe people who weren’t ready to see random rainbows just wouldn’t see them, and I thought that was a great potential, but it was still bothering me the possibility that it might upset people to see rainbows.

A few hours later, I was texting a friend of mine. I had been a bit upset with them for a few days and I finally opened up and I was sharing with them how I was feeling. I was feeling open and tender hearted, and I realized as I was texting them all these birds were flying up and landing on the trees and sitting on the branches as I walked by the trees. Each tree I walked by a couple of different species of birds would come and land on the branches and chirp chirp. I thought it was a little strange and I even mentioned it to my friend. I was thinking to myself: This is not normal bird behaviour. A few minutes later my friend texted me about how he just saw a rainbow outside and how there was no rain to be making a rainbow. A random rainbow! I then told him about my morning rainbow contemplations and asked him if he thought it was possible that  I had made that rainbow appear for him (he lives on the other side of the continent, in a different country even, haha), and  he entertained that I might have had something to do with it. My heart was racing a bit, and then the old ego-mind kicked in and said it was just a coincidence. Luckily I don’t actually believe in coincidences, so I was still open to the possibility that I might have had something to do with that rainbow appearing.

That night I had a fire at my house, and I was hanging out with two good friends of mine, and we were talking about manifesting the things we wanted in our lives. I told them about my random rainbows contemplation that day and about the rainbow appearing to my friend, and they both seemed to think it was possible that I had helped to manifest it. I started to feel more courage in my heart and open to the possibility that we all could really create and manifest whatever it was wanted to have in our lives. I started to imagine a world where we all had whatever it is we wanted in our lives and everyone was surrounded by abundance. I then started to imagine a world without limitations, a world where people were living in a paradise. My friend was talking about living in castles, so I started to imagine a world where everyone lived in castles and there were unicorns walking around and people could just manifest rainbows whenever they wanted, like some sort of parlour trick. It was fun to think about!

I came to the realization that while it might be too difficult for me to create such a magical world in one lifetime, it was still possible to create so much magic in this reality. That, if more and more people were creating random rainbows and other little “miracles” in their lives, it would open up other people to the possibilities of what they could create for themselves. I also thought about how it would be really interesting to get a group of people together and start co-creating.

The next morning I was on Facebook where I saw this amazing picture of a Buddhist monk sitting on the ground with all these deer surrounding him, lying on the grass all around him, with him petting them. If that wasn’t a miracle in itself, there was more. There was a rainbow in front of the monk! I couldn’t believe it! I started laughing so hard. I then texted my friend who saw the rainbow the day before, I sent him the picture of the monk and told him “Fuck it, I’m going to start making rainbows everywhere”!

It was a very rainy day here yesterday, which is very normal for this time of year, and I was having a peaceful day, cleaning the house, thinking about the things I wanted to create for myself (rainbows included). I was then having this intense moment where my heart began to feel super full, I went to the back of the house to do something and I noticed that the sky was all lit up and golden. I stepped back inside the house and my roommate came busting in through the front door: “Come look outside, there is a rainbow!”  I couldn’t believe it! It was a random rainbow! I felt so intense and I asked my roommate if she thought that I had something to do with that rainbow and she said she believed that I did have something to do with it. I was so excited about that I had something to do with that rainbow! I asked the faeries if I made the rainbow and they said “You didn’t have anything to do with actually making the rainbow, that’s our job, but you have everything to do with it being there. You manifested the rainbow.”

I would say that the most important part of the day yesterday, wasn’t even the rainbow, it was that for the first time I found myself becoming more confident. More confident in myself and my ability to create and manifest. That rainbow yesterday was the faeries showing me that I can create whatever it is I want in this world, and to not worry so much about other people. The only limitations there are, are the ones that I place on myself. 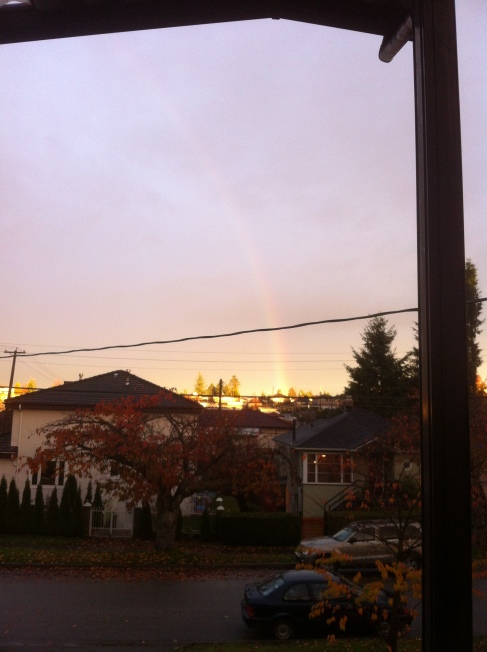 5 thoughts on “A Lesson in Manifesting”

This site uses Akismet to reduce spam. Learn how your comment data is processed.